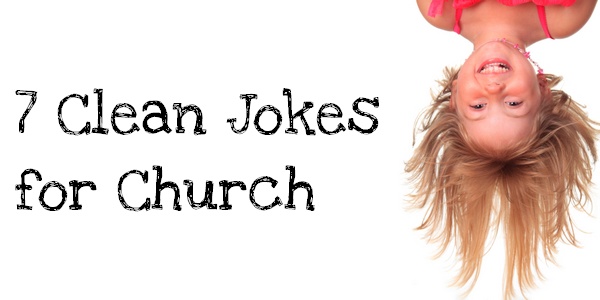 You’ll love these clean church jokes I found in my email. I’m sure they’ve been floating around the Internet for a while, but several were new to me. I’m not always a fan of Christian jokes or church humor, but these made me smile.  I’m posting them just in case you need a little laugh this morning.

Why do Brides Wear White?

Attending a wedding for the first time, a little girl whispered to her mother, “Why is the bride dressed in white?”

The mother replied, ‘Because white is the color of happiness, and today is the happiest day of her life.’

The child thought about this for a moment then said, “So why is the groom wearing black?”

While she was running and praying, she tripped on a curb and fell, getting her clothes dirty and tearing her dress. She got up, brushed herself off, and started running again!

As she ran she once again began to pray, ‘Dear Lord, please don’t let me be late…But please don’t shove me either!’

Three boys are in the school yard bragging about their fathers. The first boy says, ‘My Dad scribbles a few words on a piece of paper, he calls it a poem, they give him $50.’

The second boy says, ‘That’s nothing. My Dad scribbles a few words on piece of paper,
he calls it a song, they give him $100.’

The third boy says, ‘I got you both beat. My Dad scribbles a few words on a piece of paper, he calls it a sermon, and it takes eight people to collect all the money!’

A Sunday School teacher asked her class why Joseph and Mary took Jesus with them to Jerusalem . A small child replied, ‘They couldn’t get a baby-sitter. ‘

A Sunday school teacher was discussing the Ten Commandments with her five and six year olds. After explaining the commandment to ‘Honor thy father and thy mother,’ she asked, ‘Is there a commandment that teaches us how to treat our brothers and sisters?’

Without missing a beat, one little boy answered, ‘Thou shall not kill..’

At Sunday School they were teaching how God created everything, including human beings. Little Johnny seemed especially intent when they told him how Eve was created out of one of Adam’s ribs.

Later in the week his mother noticed him lying down as though he were ill, and she said, ‘Johnny, what is the matter?’

Little Johnny responded, ‘I have pain in my side. I think I’m going to have a wife.’

Beauty And The Microscope: What Science Can Learn From Art